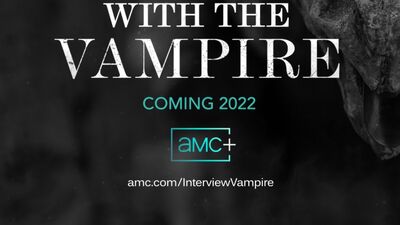 Interview with the Vampire is an upcoming gothic horror series on AMC created by Rolin Jones. It is based on the novel of the same name. Anne and Christopher Rice are attached as non-writing executive producers, and the series will premiere on October 2, 2022. AMC is looking to turn Rice’s...

The official trailer for the AMC adaptation of Interview with the Vampire.

Interview With The Vampire:

Lestat and Louis are headed for the small screen after AMC greenlighted a series adaptation of Anne Rice’s Interview with the Vampire.

The cable network has ordered an eight-part series based on the book, which was famously turned into a 1994 movie starring Tom Cruise and Brad Pitt.

This comes after AMC Networks acquired the rights to 18 of Rice’s books last year.

The company is looking to turn Rice’s collection of novels, which include the Vampire Chronicles and Mayfair Witches series, into a franchise with Breaking Bad and Better Call Saul producer Mark Johnson overseeing the rollout. Johnson, who has an overall agreement with AMC Studios, will take the lead on the universe.

Rolin Jones, who co-created and served as showrunner for the first season of HBO’s Perry Mason, will serve as creator, showrunner and writer of the Interview with the Vampire series. Jones, who also has an overall deal with AMC Studios, will EP alongside Johnson with Anne and Christopher Rice set as non-writing executive producers.

The series will launch on AMC and its sister streamer AMC+ in 2022.

AMC Networks has given a series green light to Anne Rice’s Mayfair Witches, based on the “Lives of the Mayfair Witches” trilogy, to run on the linear AMC network and streamer AMC+. Mayfair Witches, which has received an eight-episode order, is the second series in AMC’s expanding Anne Rice universe and will follow Anne Rice’s Interview with the Vampire with a late 2022 premiere.

The series order for Mayfair Witches, written and executive produced by Esta Spalding and Michelle Ashford and executive produced by Mark Johnson through his Gran Via Prods., comes three and a half months after AMC Studios opened a writers room for the project under AMC’s scripts-to-series model. There has been no decision yet on the other two writers rooms opened by AMC Studios in the same round; for hourlong Invitation to a Bonfire and half-hour Demascus, with the latter exploring preliminary casting.

Spalding, who has an overall deal with AMC Studios, will serve as showrunner on Anne Rice’s Mayfair Witches, which focuses on an intuitive young neurosurgeon who discovers that she is the unlikely heir to a family of witches. As she grapples with her newfound powers, she must contend with a sinister presence that has haunted her family for generations.

“The world of witches has fascinated and terrified for centuries, and yet Anne Rice’s particular lens on witches explored something new altogether – women who are powerful, and often brutal, and always committed to subverting our current power structures,” Spalding and Ashford said. “We are so excited to join our partners AMC and Gran Via Productions in making this mysterious and provocative world come to life.”

‘Anne Rice’s Lives of the Mayfair Witches’ Gets Series Order, Joins ‘Interview With The Vampire’ On AMCDeadline