The Vampire Chronicles Wiki
Register
Don't have an account?
Sign In
Advertisement
in: Characters, Vampires, Females, Characters in The Queen of the Damned

Enkil
Lestat de Lioncourt
Akasha was the first vampire in existence. She is known among vampires as The Great Mother.

Akasha was the most beautiful vampire. Even when she was turned to stone, her skin reflected the light of the moon. Akasha had such beautiful skin that there was not a blemish present. She had very dark, nearly black lustrous eyes and cheeks that "shone like pearls." She was described as having firm shapely limbs and straight shoulders. She had black hair that was often braided in the Egyptian style and long and curly when loose. She had a high feminine voice and serene face. She was from Uruk, an ancient city that lies in modern day Iraq.

Akasha is a selfish, empty, nihilistic person with no sense of morality or human compassion. Her actions are almost always based on her need to fill her own inner emptiness. Maharet describes her as the only true monster among them because she refuses to acknowledge her own monstrosity.

Akasha was originally from Uruk, now known as Iraq. She was born over 6,000 years ago, long before "The first pharaoh built the first pyramid." At a young age she married Enkil, the King of Kemet (which would later become Egypt). Akasha and her husband Enkil wanted their subjects to turn away from cannibalism and encouraged them to eat grains by farming. According to Marius in The Vampire Lestat, Akasha and her husband were not the first people in Kemet to follow this path, but they were the first rulers, and were perhaps influenced by earlier believers. Akasha became a beloved ruler for turning her people away from violence and toward peace.

Eventually Akasha became interested in supernatural spirits. She invited the twin witch sisters Maharet and Mekare to commune with the spirits, but they refused. Some time later, Akasha sends soldiers to the twins' village who happen upon their mother's funeral, preparing to perform their culture's funeral rite of consuming their mother's brain and heart. The soldiers kill everyone, save the twins, arresting them for the crime of cannibalism, and drag them to Kemet.

At the court, Akasha "spares" the twins and demands they answer countless trivial questions with the help of spirits. The spirits provide only the simplistic answers which they are capable, then grow irritated and provide only rude retorts. Enraged, Akasha throws Maharet and Mekare into jail as blasphemers. The next day the Queen came again and asked the same questions. Against Maharet's wishes, Mekare summons a powerful spirit named Amel to seek revenge on Akasha. After Amel threatens to attack Akasha as punishment for summoning spirits, she forces her head steward Khayman to rape Maharet and Mekare in front of her entire court. The Queen allows the twins to go home after the rape, but Amel still remains in their court, furious at the humiliation of the twins. Amel punishes Akasha, Enkil and Khayman by pestering them day and night in their homes, whether it's knocking objects over or throwing them at them, eventually driving them mad.

Opposition to Akasha and Enkil was always strong amongst cannibalists, mostly by those who practiced ritual cannibalism as opposed to savage cannibalism. Knowing that they were the cause of an malevolent spirit oppressing Kemet makes the case against them even stronger. One night, a group of nobles sneak into the palace and stab Enkil and Akasha multiple times, leaving them both mortally wounded. As Akasha's soul leaves her body, Amel snatches it and intertwines it with his own and thrusts their combined spirits into her body, making Akasha the world's first vampire.

Akasha saves a dying Enkil by draining him of his remaining blood before allowing him to drink nearly all of hers, making Enkil the world's second vampire and Akasha's first fledgling. Together, they track and kill all the nobles that participated in their assassination attempt. Akasha realizes she and Enkil are now immortal with superhuman strength, but they cannot be exposed to direct sunlight, cannot have intercourse and have an insatiable need to constantly drink blood to survive. She sends Khayman to fetch Maharet and Mekare to explain her nature and why she came to be.

Maharet replies that the spirit Amel now inhabiting the Queen and King is too large to be contained in their singular human body. The spirit and their bloodlust will be proportionally diluted as more humans are made into vampires. To verify the Maharet's claims, Akasha betrays Khayman's loyalty by making him into a vampire against his will. Finding Maharet and Mekare's answers to be unsatisfactory as they cannot completely eliminate the bloodlust, the twins are sentenced to death. Before the execution takes place, she has Maharet's eyes and Mekare's tongue amputated. The night before their execution, the twins are saved by Khayman who is furious at what Akasha has done to him. He makes Mekare into a vampire and Mekare makes Maharet into a vampire, hoping with their new powers they will be able to defeat Akasha.

Akasha and Enkil spend the next weeks battling Khayman and the twins and their fledglings who make up their Vampire Army. Eventually, Akasha succeeds in trapping the twins in Saqqara and separately sets them adrift in the ocean in stone coffins: Maharet to the east, and Mekare to the west.

As Maharet promised, as more vampires are made, Akasha and Enkil's bloodlust decreases. They eventually become living statues, cared for by vampires who know their importance to their kind. As the parents of all vampires, any injury done to Akasha and Enkil will be done to all vampires. If they were to die, all vampires in the world would die with them.

One vampire, referred to as the Elder, became guardian for Akasha and Enkil. Out of anger, he left them out in the sun to burn. Vampires across the world either died of spontaneous combustion or were severely burned. Unharmed, Akasha uses the Mind Gift to call out to a recently made Marius to take them out of Egypt as other vampires mean to destroy them. As for the Elder, she kills him by crushing his head beneath her feet and pours burning oil on his remains.

Akasha and Enkil continue to spend the next two thousand years under Marius's care as living statues. When Marius is severely burned by the Children of Darkness, Akasha allows him to drink her blood to heal his wounds.

Akasha first encounters Lestat in the eighteenth century when Marius shows him Akasha and Enkil's sanctuary. Despite Marius's protests, Lestat goes down alone and plays the violin. Akasha awakens and offers him her blood and then drinks his. They are stopped by a jealous Enkil, who comes out of his state as a living statue and begins to crush Lestat. Lestat is saved only when Marius comes and threatens to take Akasha away from Enkil if he doesn't stop. At the end of The Vampire Lestat, Lestat reflects that the blood Akasha gave him was vital to him surviving Claudia's attempt on his life.

In 1985, Akasha awakens for the last time when she hears Lestat giving a live rock concert. She sees the desirability of him as her consort and drains Enkil of all of his blood to make herself the single progenitor of the vampire race and to be rid of Enkil, who she has grown tired of. Marius arrives in the sanctuary after Akasha has drained Enkil and is then trapped in a case of ice by her.

Akasha goes to San Francisco and kidnaps Lestat and makes him her consort. She embarks on a mass killing of vampires, finding them by listening to their thoughts. She kills Baby Jenks, Laurent, and countless other weak fledglings. Seventeen vampires managed to survive Akasha's onslaught: Maharet, Mekare, Khayman, Louis, Jesse Reeves, Gabrielle, Armand, Daniel Molloy, Marius, Mael, Santino, Pandora, Eric, Vittorio, Thorne and the coven that made Quinn Blackwood, Manfred Blackwood, Petronia, and one from ancient Greece. They were either vampires that Lestat loved, old ones she could not kill easily, or those she could not detect because they blocked their thoughts from her.

The surviving vampires are confronted by Akasha in Maharet's Sonoma compound. She explains her plans for her to be the new god of the world and offers the vampires a chance to be her followers as angels in her New World Order. Akasha plans to kill 90 percent of the world's human men, and to establish a new Eden in which women will worship Akasha as a goddess. They all refuse to partake in Akasha's plan despite her vow to destroy all of them if they do not comply. Maharet speaks for all of them when she boldly says that Akasha simply wants to dominate and be worshipped, and have everyone obey her, no matter how many lives are lost.

Their refusal makes Akasha furious, but before she can destroy the surviving vampires, Mekare, whom no one has seen for 6,000 years, appears in the room. She charges at Akasha, shoving her into a glass wall, causing a large shard to decapitate her. Just as doom is spelled out for all vampires, Mekare devours both the brain and heart of Akasha, taking into herself the Sacred Core which contains the spirit of Amel. Successfully bonding with the Sacred Core, Mekare becomes the new queen of all vampires, while Akasha's body becomes a transparent shell. 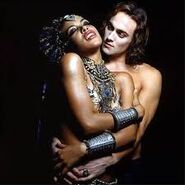