"An orphan of five years old, brought into the Blood in 1794 by Lestat and Louis in New Orleans. Long dead. Her story is told in Interview with the Vampire. Later appears as a spirit in Merrick, though the appearance is suspect."[1]

Claudia was a five-year-old vampire child. With long curly golden hair, blue eyes, and fair skin, she was described as resembling a perfectly painted china doll.

In 1794, Louis finds a little girl who was only 5, grieving over her dead mother's plague-stricken body. Half starved from feeding only on the blood of rats for the past four years, he drinks from her in a frenzy. He is discovered by Lestat who doesn't hesitate to mock him for his hypocrisy. In his shame, Louis runs off, leaving the girl for dead as Lestat danced madly with her mother's corpse. Concerned citizens brought the girl to a make-shift hospital for orphans of plague victims. Infected with the plague and weak from Louis' feeding, she became delirious. Lestat, posing as her father, took her from the hospital.

Upon his return to Rue Royale, Louis is horrified to find Lestat had brought the girl to their home and despite his objections, Lestat makes the dying young girl into a vampire, naming her Claudia. Being incredibly young when made into an immortal vampire, Claudia remembers very little of her previous life as a mortal girl.

Life as a Vampire

For sixty-five years, Claudia, Louis and Lestat lived together as a vampire family. Over time, Claudia grew increasingly resentful at her maker Lestat for giving her the Dark Gift, trapping her in the body of a little girl, never to be a woman, and for his refusal to tell her and Louis what he knows of the history of their kind. She takes out her frustration by killing the housemaid and her daughter, leaving Louis and Lestat no choice but to kill the housemaid's husband and son who were frantically searching for them. Knowing Lestat will never let her or Louis go, she secretly plots to be rid of him so she and Louis can be free.

One night, she presents as a peace offering to Lestat two homeless boys, claiming they are drunk from a small amount of wine when their system is really filled with absinthe and laudanum. Delirious and weakened over his impaired state from his feeding on one of the boys (which kills the boy while the other died from the absinthe), Claudia slashes Lestat's throat with a knife and plunges it into his heart. Lestat's blood pours from his body, leaving it exsanguinated. Believing him to be dead, she and Louis dump his body in the swamp.

The night she and Louis are set to sail to Europe, Lestat surprises them at their home, revealing that their attempt to kill him has failed. To stop Lestat in his rage from killing them, Louis sets fire to Rue Royale with Lestat still inside, and the two escaped to Europe.

Initially, the only vampires Claudia and Louis are able to find are mindless blood drinkers who are nothing more than animated corpses. After years of failing to find other vampires like them, they meet Armand and his coven at the Théâtre des Vampires in Paris. Armand is instantly attracted to Louis who does little to discourage him.

Lestat in his search for powerful old vampire blood to help restore his damaged body, goes to Paris where he knows Armand's blood can help him. In his desperation, he reveals to Armand it was Claudia who put him in his weakened state. Armand takes advantage of this knowledge by calling on Lestat as a witness and sentences Claudia to death by exposing her to sunlight, for it is forbidden by their coven for a vampire to kill their maker or to even make the attempt. After Claudia's execution, Armand does not hold up his end of the agreement by refusing to give Lestat any of his powerful blood to help restore him, citing it was revenge for how he blames Lestat for destroying the beliefs of his previous coven that lived under Les Innocents cemetery of Paris years ago.

Left alone after Claudia's death, Louis pairs with Armand and for years they travel together. Louis never recovers from the death of Claudia and eventually leaves Armand for his involvement. Armand would later reveal that Claudia's fate was sealed the moment her existence was known by his coven because vampires made at such a young age were never permitted to continue to live.

In the 1994 movie adaptation of Interview with the Vampire, Claudia is portrayed by Kirsten Dunst, who was eleven years old at the time. Director Neil Jordan believed a five-year-old was highly unlikely to understand the necessary emotional depth to play a complex character as Claudia, so an older actress was cast instead.

In the musical production of Lestat, Claudia was given two solos: I Want More, her "plea" to Lestat and Louis that she was sick of being a sweet little girl, revealing her hidden desire to hunt, and the somber lament I'll Never Have That Chance, sung when she realizes she will never get to grow up and experience a normal life. Portrayed by Allison Fischer, her performance as Claudia is often regarded as the highlight of the show. 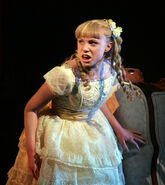 Claudia alongside Lestat and Louis.
Community content is available under CC-BY-SA unless otherwise noted.
Advertisement