Interview with the Vampire (film) 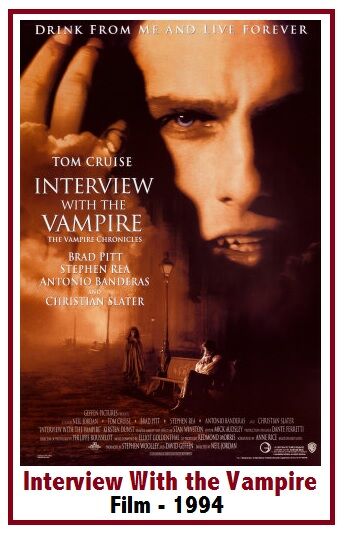 Interview with the Vampire: The Vampire Chronicles is a 1994 film directed by Neil Jordan, based on the 1976 novel Interview with the Vampire by Anne Rice, starring Brad Pitt as Louis de Pointe du Lac and Tom Cruise as Lestat de Lioncourt. The film focuses on Louis and Lestat, beginning with Louis being made into a vampire by Lestat in 1791. The film chronicles their time together, and their making of a young girl, Claudia, into a vampire. The narrative is framed by a present day interview, in which Louis tells his story to a San Francisco reporter. The supporting cast features Christian Slater, Kirsten Dunst and Antonio Banderas.

The film was released in November 1994 to generally positive reviews, and received Oscar nominations for Best Art Direction and Best Original Score. Kirsten Dunst was also nominated for a Golden Globe for Best Supporting Actress for her role in the film.

In modern-day San Francisco, a young reporter (referred to as the boy in the novel and then later in the Chronicles his name is revealed to be Daniel Molloy) interviews Louis de Pointe du Lac, who claims to be a vampire.

Louis begins by describing being made into a vampire in Spanish Louisiana in 1791 at age 24 by the vampire Lestat de Lioncourt. Louis suffered from a death wish following the deaths of his wife and child; Lestat offered Louis the death he craved, but Louis asks to live instead. Lestat makes Louis into a vampire and teaches him how to live as one. As part of his education, Lestat informs Louis that some vampires, as an extension of the 'Dark Gift' of vampirism, can develop the capacity to read the thoughts of others. At first, Louis rebels against hurting humans, drinking animal blood instead. He finally succumbs and kills his faithful house slave Yvette. Guilt ridden, he tries to kill himself by setting fire to his house; but Lestat rescues him and they flee.

Wandering the streets of New Orleans, amidst an outbreak of plague, Louis finds a sick little child in a house with her dead mother. Starving for human blood, he bites the girl whom Lestat later makes into a vampire "daughter" who is then to be known as Claudia, to discourage Louis from leaving him. Lestat teaches Claudia to live as a vampire and prey on humans. As thirty years pass, Claudia becomes a sadistic killer and closely bonded to Louis and Lestat. But, when she realizes she will never grow up, she is furious with Lestat. She tricks him into drinking the blood of twin boys she killed by overdosing them with laudanum, knowing that dead blood is fatal to vampires. This weakens him, and she slits his throat. Claudia and Louis dump Lestat's body in a swamp; but he returns, having drained the blood of swamp creatures to survive. Lestat attacks them, but Louis sets him on fire and is able to flee to Paris with Claudia.

In 1870, Louis and Claudia live in harmony in Paris, but Louis is still bothered by the question of how vampires came to be and if there are any others. One night, Louis encounter vampires Santiago and Armand. Armand invites Louis and Claudia to his coven, the Théâtre des Vampires, where they witness Armand and his coven dispatching a terrified human woman before an unsuspecting human audience. Louis makes inquiries about vampires and their origins, of which Armand is mostly evasive in his answers. Santiago, having read Louis' thoughts about Lestat, warns them that the only crime a vampire can commit is killing another vampire.

Claudia accuses Louis of wanting to leave her and join Armand. She demands he makes a human woman, Madeleine, into a vampire to be her new protector, and he reluctantly complies. But doing this act, Louis feels he has sacrificed the last of his humanity. As punishment for Lestat's murder, the Parisian vampires abduct all three; separating Louis from Claudia and Madeleine by imprisoning him in a sealable metal coffin. When freed by Armand the next night, he learns Claudia and Madeleine have been turned to ash by the sun, having been trapped in an airshaft by the coven. He returns to the Theatre and avenges Claudia and Madeleine by burning the vampires in their theatre as they sleep and bisecting Santiago with a scythe. Armand arrives in time to help him escape and once again offers him a place by Armand's side. Louis once again refuses, knowing that Armand choreographed Claudia's demise to have Louis all to himself, and he leaves Armand for good.

As decades pass, Louis explores the world alone, still grieving for Claudia, before returning to the United States. He is seen and heard telling how he saw "the sun rise for the first time in 200 years", in a movie theatre, watching Sunrise: A Song of Two Humans, Nosferatu, Gone with the Wind, and Superman. In 1988, he returns to New Orleans and finds Lestat, a mere shadow of his former self. Lestat asks Louis to rejoin him, but Louis rejects him and leaves.

At this point, Louis concludes the interview, claiming that his experiences have resulted in his becoming the "very spirit of preternatural flesh; detached, unchangeable, empty." The reporter is shocked by this statement and openly declares his desire to have had Louis' experiences as a vampire and asks Louis to make him into a vampire. Louis is immediately outraged by the reporter's complete disregard for the pervasive suffering caused by vampirism outlined in the interview. Louis lifts the reporter, pinning his body against the ceiling. The next instant, Louis vanishes. The reporter hurriedly runs to his car and drives away, galvanized by his interview as he plays it through the cassette player. Lestat suddenly appears, attacking him and taking control of the car. Revived by the reporter's blood, he then offers a dying reporter "the choice he never had" as they drive off into the San Francisco night, taking out the cassette and turning on the radio, which is playing a Guns N' Roses cover of The Rolling Stones' Sympathy for the Devil.

Author Anne Rice wrote the screen play in the 1970s with French actor Alain Delon in mind for the role of Louis. Later on when the film was made British actor Julian Sands was considered to play the role of Lestat by Rice herself; but, because Sands was not a well-known name at the time, being only famed for his performance in A Room with a View, he was rejected and the role was given to Tom Cruise. This was initially criticized by Anne Rice, who said that Cruise was "no more my vampire Lestat than Edward G. Robinson is Rhett Butler" and the casting was "so bizarre; it's almost impossible to imagine how it's going to work". Nevertheless, she was satisfied with Cruise's performance after seeing the completed film, saying that "from the moment he appeared, Tom was Lestat for me" and "that Tom did make Lestat work was something I could not see in a crystal ball."

Due to Rice's perception of Hollywood's homophobia, at one point she rewrote the part of Louis, changing his sex to female, in order to specifically heterosexualyze the character's relationship with Lestat. At the time, Rice felt it was the only way to get the film made, and singer-actress Cher was considered for the part. A song titled Lovers Forever, which Cher wrote along with Shirley Eikhard for the film's soundtrack, got rejected as Pitt was ultimately cast for the role. Though, a dance-pop version of the song was released on Cher's 2013 album, Closer to the Truth.

Originally, River Phoenix was cast for the role of the reporter (as Anne Rice liked the idea), but he died four weeks before he was due to begin filming. When Christian Slater was cast in his place, he donated his entire salary to Phoenix's favorite charitable organizations. The film has a dedication to Phoenix after the end credits.

Interview with the Vampire: The Vampire Chronicles opened on November 11, 1994. Opening weekend grosses amounted to $36.4m, placing it in the number one position at the US box office. In subsequent weeks it struggled against Star Trek: Generations and The Santa Clause. Total gross in the United States was $105 million, while the total including international gross was $224 million, with an estimated budget of $60 million.

The film received mixed to positive reviews among film critics. Review aggregate website Rotten Tomatoes reports the film as holding an overall 61% "Fresh" approval rating based on 51 reviews, with a rating average of 5.9 out of 10. The sites consensus reads: "Despite lacking some of the book's subtler shadings, and suffering from some clumsy casting, Interview with a Vampire benefits from Neil Jordan's atmospheric direction and a surfeit of gothic thrills." Praise from The New York Times' Elvis Mitchell and the Chicago Sun-Times' Roger Ebert was tempered by poor reviews in The Washington Post and Time magazine.

The film was nominated for two Academy Awards—for Best Art Direction/Set Decoration (Dante Ferretti, Francesca Lo Schiavo) and for Best Original Score, but lost to The Madness of King George and The Lion King, respectively. This film won a Razzie Award for Worst Screen Couple for Pitt and Cruise.