The Vampire Chronicles Wiki
Register
Don't have an account?
Sign In
Advertisement
in: Characters, Vampires, Characters in The Queen of the Damned,
and 3 more

Unknown valley, away from Kemet

Thorne
Jesse Reeves
Many unknown others

Maharet and her sister, Mekare, were twin sisters and powerful witches living in a beautiful valley not far from Egypt six thousand years ago. They had curly red hair and green eyes. They were hereditary witches who could communicate with spirits. This attracted the attention of Akasha, the young queen of Kemet, now known as Egypt, who sent them an invitation to visit her when they were sixteen years old. They refused, sensing something ominous about the request.

Akasha's next request came in the form of violence, when the twins were performing cannibalistic funeral rites for their mother. The queen, who had made a policy of stamping out ritual cannibalism, sent soldiers to their village, killing everyone in their path and dragging the sisters away.

When the twins arrived in Kemet, they were looked on in awe and fear by all who saw them. These people had never seen red hair, and twins were taboo in the country. They answered with truth all the questions about spirits and gods put to them by the Queen. However, as their answers did not fit with Akasha's beliefs, they were labelled as blasphemers and were thrown into jail. The next morning, the Queen sent and put the same questions to them. Mekare called on a mischievous spirit named Amel, against the wishes of her sister, to display her power. This terrified the queen and her husband, KingEnkil, and the twins were thrown into jail again for three nights and days before they received their punishment.

Their punishment was to be raped by the King's steward, Khayman, in front of the whole court. Khayman was not one to accept violence and hated to do the task, but nonetheless had to obey his sovereigns' orders. The sisters were allowed to go home after the rape.

After a difficult time, Maharet and Mekare eventually returned to their homeland, and there Maharet bore a child, Miriam, from Khayman's rape. The sisters put their trials behind them, and settled in to rebuild their life in the valley. But their peace was shattered a year later when Khayman arrived with an army. He took them back to Kemet, and on the journey there told them what had happened since their departure.

The spirit Amel, furious at the humiliation of the twins, had run amok. He pestered the king and queen day and night, throwing and knocking things over, driving the pair mad. It had also been tormenting Khayman for his part in the rape, ripping his house apart and unearthing his father's body from its tomb. The nobles were displeased with their monarchs for bringing this trouble on them, and had plotted to kill them. The nobles had followed the royal couple to Khayman's house, where they were pleading with the spirit to let them be, and attacked them. But somehow Akasha and Enkil had survived, and all the nobles had been killed. Since then, the King and Queen had only been seen at night, and would not leave their palace. People were disappearing, and Khayman had resolved to bring the twins back in hopes that they could put an end to all these troubles.

Upon reaching Kemet, the twins learn what has happened. Amel had developed a taste for blood, and one of his favorite torments was pricking people and causing them to bleed. Akasha and Enkil had been stabbed, and as they lay bleeding to death, the spirit of Amel could be seen in the form of droplets of blood. The spirit was seen to dive into Akasha's body, and she was somehow regenerated in a new form. Akasha fell upon Enkil, draining him of the blood that was left, and then feeding him her own. They were the first blood-drinkers.

Akasha and Enkil had summoned the twins in the hope that the witches could enlighten them on the form that they had taken, and how they could satisfy their endless thirst for blood. The twins were of little help, however, and were thrown into jail to be put to death the next evening, but not before Mekare's tongue and Maharet's eyes were cut out.

Three hours before dawn, Khayman came to them in despair. He had been betrayed by his king and queen, who had turned on him and made him one of them to test their new abilities. He made Mekare into a blood-drinker, and in turn she made Maharet into one. They escaped the prison and made more blood-drinkers as they went, hoping to create an army to defeat the evil king and queen. These later became known as the First Brood.

Several weeks later, they were captured in Saqqara. The twins were put into stone coffins, and set adrift in the ocean, Mekare to the west, Maharet to the east. Maharet landed on the southern coast of Africa, and wandered for the next six millennia, tracking the bloodline of her daughter Miriam and searching for Mekare. It is not known for sure what became of Mekare, but pictures were found thousands of years later in South America of a red-haired woman. Similar pictures had been found in Africa. Maharet and others suspected that Mekare had gone wild and spent all that time in the jungles, avoiding civilization.

Khayman wandered throughout Europe, losing his memory every few centuries. He does not see the twins again until the mid 1980s, during the events of The Queen of the Damned, when Maharet gathers them together to her Sonoma compound in California. There, Akasha is defeated when Mekare unexpectedly arrives and causes Akasha to be decapitated by a falling pane of broken glass. Mekare then consumes Akasha's heart and brain, taking the sacred core of Amel into herself, becoming the new Queen of the Damned with Maharet acting as the Queen Regent.

After these events Maharet makes contact with the Vampire doctor Fareed, where he does a procedure that gives her new eyes, and Thorne had his returned to him. In the book Prince Lestat, Maharet is shown to be in distress over her sister and the Vampire burnings coming from around the globe. Maharet meets her demise at the hands of the fire gift by Rhoshamandes and Benedict. 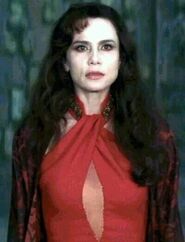 Lena Olin Maharet in "Queen of the Damned" 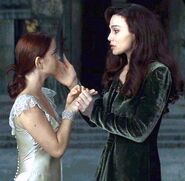 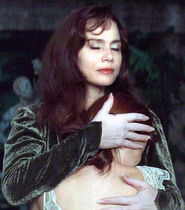 Maharet and Jesse 2
Community content is available under CC-BY-SA unless otherwise noted.
Advertisement