The Vampire Chronicles Wiki
Register
Don't have an account?
Sign In
Advertisement
in: Characters, Males, Humans, Characters in The Tale of the Body Thief

Raglan James is the antagonist in The Tale of the Body Thief. He was a gifted psychic whose abilities enabled him to switch bodies with people. He was once a member of the Talamasca, but was kicked out for constant theft. He is a kleptomaniac who enjoys stealing for the thrill of it. It is revealed that every single thing he owns, from his house to his body, was stolen or schemed for. However, he also has major psychological problems, and his life is a series of cycles - he gets rich by theft, then often ends up in prison. Dying of cancer several years before, James tricked the inmate of a mental institution into switching bodies with him, allowing him a kind of immortality.

With his newly stolen body, which is described as a tall, handsome young man of Anglo-Indian mix, Raglan approaches Lestat with a tantalizing offer to switch bodies with him for a period of time so Lestat can experience once again what it's like to be human. While given time to consider Raglan's offer, Lestat is sternly warned from David Talbot not to accept, but Lestat ignores David's warning and agrees to the switching of bodies with his consciousness in the human body Raglan stole, and Raglan in Lestat's vampire body. Immediately upon the completion of the switch, Raglan flees, leaving Lestat in a body he soon discovers is dying from pneumonia. Lestat realizes Raglan never intended to return his consciousness to his vampire body, but to have his consciousness die within the sick body he was residing and Raglan permanently in possession of Lestat's powerful vampire body.

Despite Raglan's setup, Lestat recovers from the pneumonia and enlists the help of David to get his body back. Lestat and David are made by Raglan from their pursuit of him and he changes his plan. He switches bodies with David shortly before Lestat, who has since been trained by David, replaces his consciousness into his original vampire body, not realizing the consciousness being thrust out into the young human body is David's.

While in David's elderly body, Raglan posing as David tries to trick Lestat into making David's body with his consciousness into a vampire. Momentarily before Lestat performs the act of giving him the Dark Gift, he realizes Raglan's deception and out of sheer reaction, crushes the head before him, killing Raglan in David's body. Lestat later reunites with David who is now in the young handsome body Raglan originally switched with Lestat. Not giving David a choice in the matter, Lestat makes David in his new body into a vampire. David later confides in Lestat that despite his earlier protests, this was what he secretly wanted. 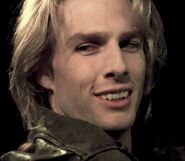